he Rev. Martin Luther King Jr., for a period of 13 years, was one of the most scrutinized and filmed figures in American history, from the Montgomery bus boycott in 1955 to his assassination in Memphis in 1968.

But it wasn’t just the press watching him. The Federal Bureau of Investigation, which J. Edgar Hoover led, took a keen interest in King as he became the de facto leader of the civil rights movement. As King became ever bigger, Hoover’s obsession grew as well.

As documented in a new film, “MLK/FBI,” out Jan. 15 in theaters and on video on demand, Hoover expended untold amounts of money and manpower tapping King’s phones, using long-term spies to track his whereabouts and creating a monstrous dossier of King’s philandering exploits and strategy sessions.

The film, based in part on a book written by David Garrow, uses newly declassified FBI files to illustrate the depths of the government’s surveillance and harassment of King in the 1960s. The documentarians even revealed a letter the FBI wrote King telling him to kill himself, accompanied by incriminating evidence of his interactions with mistresses.

“The FBI surveilled everybody at the time,” said Ben Hedin, producer of “MLK/FBI” who previously released a Grammy-nominated documentary in 2016 called “Two Trains Runnin’” about the hunt for two blues singers in Mississippi during the height of the civil rights movement. “But what they did to King was more than that. It was active blackmail and character assassination they didn’t do with Malcolm X and other civil rights leaders.”

When people at the Toronto Film Festival saw the film in the fall, Hedin said many didn’t realize how reviled King was in the 1960s, that he was not the man people universally laud today on both sides of the political aisle. Hoover, the film noted, was more popular than King at the time, his unease matching those of many white Americans at the time about King and the changes he wrought.

King, despite his non-violent stance, became a symbol of white people’s insecurities at the time. “We also wanted to tell the larger story of white America’s fear of Black protest,” Hedin said. “And what we’ve seen with recent events, sadly, that hasn’t necessarily changed.”

Hedin said words like “democracy” and “patriot” are dog whistles for figures like Hoover and President Donald Trump. “To them, it means white power,” Hedin said. “There’s this tremendously rich and tragic subtext to the film we wanted to convey as much as what the FBI did specifically to King.”

Director Sam Pollard, in an interview with Vanity Fair editor Radhika Jones Sunday, watched the Capitol riots last week and felt anger, frustration and shame about America: “More than 50 years later, we are seeing the same political tropes, the same notion that some Americans feel that if they can’t have it their way, they’ll burn the house down. It’s part of the DNA of America quite honestly going back to the founding of this country... I try to be optimistic, but there’s a part of me that thinks this country never seems to learn.”

The documentary is unusual in one respect: the expert voices are not seen until the very end of the film, using them virtually exclusively as audio narrators.

Pollard said they were inspired by a 2011 documentary about the Black Power movement called “The Black Power Mixtape” that used the same technique. “We wanted to make this a truly immersive experience,” Pollard said. For most the film, they used archival photos and video, with a handful of graphic elements and re-enactments.

Under that restriction, they chose to feature just eight people to tell the story, a mix of authors and contemporaneous players from the era.

The most prominent name they talked to was Andrew Young, former Atlanta mayor and civil rights legend who is one of the few prominent colleagues of King with the Southern Christian Leadership Conference still alive.

“Young was in the room when that FBI package was opened” featuring the blackmail letter, Hedin said. “I didn’t know if he’d talk about it. But he was very candid. That was a pleasant surprise.”

Among the eight, the documentarians used two former FBI agents: Charles Knox and James Comey. Comey, when he headed the FBI from 2013 to 2017, kept Hoover’s request to wiretap King on his desk under glass and made a point to send agents in training to the King monument and write papers about him. “To have a director publicly attempt to come to terms with this shameful part of the bureau’s history is notable,” Hedin said.

The videos and photos came from 40 different sources. Some are familiar. Some are not. Pollard lauded archival producer Brian Becker for tracking down some gems.

“He found specific video of Coretta Scott and King’s parents and children I had never seen,” said Pollard, who was also an executive producer for the 2020 HBO mini-series “Atlanta’s Missing and Murdered: The Lost Children.” “He found footage of Dr. King and Harry Belafonte on ‘The Merv Griffin Show’ I had never seen. There was some eye-opening stuff.”

While the FBI has declassified its written files and a few surveillance photos are available, the FBI audio tapes of King remain sealed until at least 2027.

Hedin said besides the salacious elements in the FBI files, they also reveal King’s generous spirit. “He didn’t feel like he deserved the Nobel Peace Prize,” he said. “He accepted it on behalf of everybody who worked to advance civil rights.”

And in the end, those files and putting together this film only raised Hedin’s esteem for King: “I gained a much more intimate sense and respect of what he had to endure while looking the worst elements of the country in the eye.”

As for Hoover, his impressions didn’t change much: “I went into the movie with this picture of him as a racist tyrant. And we did not discover anything new that would dispel that.” 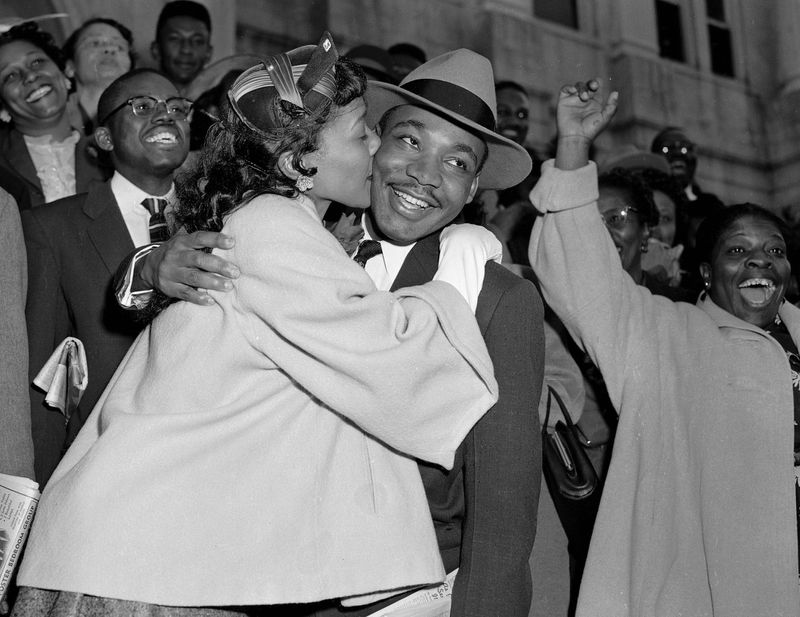